How can I resist the power of grace?

While dad was polishing his new car, his 5-year-old son picked up a stone and scratched lines on the side of the car. In his fits of anger, dad took the child’s hand and hit it many times. He didn’t realize that he hit the child’s hand with a wrench. At the hospital, his child said, “Dad, when will my fingers grow back?” Dad was so hurt, he went back to the car and hit the car many times. Sitting back, he looked at the scratches the child made . . .

Years ago, I received this story as a text message from a friend. The story was so strong that it captured my imagination and instantly melted my heart—making me feel guilty about how often I find myself in parallel situations . . . playing as the careless father of an innocent child.

I have three sons. Whenever my temper collides with my sons’ innocence, I always lose. Like the father in the story, my sons’ naivety can powerfully bring me to my knees, helpless, ashamed . . . unable to reason out . . . unable to defend.

“Dad when will my fingers grow back?” the child simply asks, instead of blaming his dad, and accusing him for his temper. The child’s action depicts a strong innocent way of overcoming evil with good.

How can I defend myself with such innocent attack?

If someone attempted to punch or kick me, I would be quick to defend by using my arms or feet. I may even counterattack with another kick or punch. Likewise, if a person insulted me, I may quickly defend myself by arguing with bulletproof logic and then retaliate with more insulting comments.

But how can I defend myself from an innocent child, asking how will he recover from the damage I’ve done to him—accepting the pain and suffering without hate or plan of revenge in his heart . . . showing me love in response to my aggression?

How can I defend myself from the attacks of grace?

With this simple story, I see a snapshot of what Jesus meant when He said to Peter that even “the gates of Hades will not overcome it.” 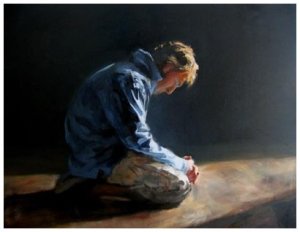 Grace, no matter, how sweet and gentle, pierces our heart like a deadly arrow . . . reaching the innermost part, penetrating our deepest soul. Indeed, grace is even more powerful than violence. The innocent-like attack of grace can bring a strong man down to his knees, helpless and broken.

Because we are so used to living an “eye for an eye, tooth for a tooth” standard of dealing with justice, it becomes easier for us to resist aggression, hatred and revenge than to face and accept grace squarely without being broke and ashamed… without having a contrite heart.

Again, how can I resist the gentle invisible power of grace?

The photo is from Musings, another WordPress blog.

Most Read Posts and Pages